In 2017 we launched BitTicket, a blockchain ticketing solution, to get rid of ticket-touts once and for all.

I find it quite funny and a great irony of the Blockchain, that the very thing that makes it secure is humanity’s inherent distrust of each other. But humans are pretty amazing because rather than allow our uncertainties and mistrust to slow us down, we invent systems like the blockchain that build trust protocols that don’t need a traditional middle man or central authority. Peer to peer trust is really the key feature of the blockchain in any form, be it cryptocurrency, legal contracts, voting or event ticketing.

Distrust giving birth to a completely trustworthy system is quite a backwards way of forward thinking.

In global terms, I think we are seeing a last gasp for protectionist politics and heavily centralised institutions. The Blockchain is by its nature decentralised, un-hackable, egalitarian and a totally unrestricted system. It doesn’t take an Elon Musk to work out that in many (not all) industries this is not only sensible but a down-right obvious move in the right direction.

So buckle your seatbelts for more Blockchain contemplations:

The Bitcoin price is really picking up some steam. Some say sell now, some say it will hit 10k some say it will hit 500k. Everyone and their hairdresser seems to have some sort of crack pot theory. Well here’s mine: The important thing here isn’t necessarily the Bitcoin price, It’s the fact that the technology and ideology are growing in popularity. People are buying into the idea not the asset.

Bitcoin will have its value in being the 'Gold Standard' of Blockchain. i.e, it was the original, first widely accepted version of the concept and the most sought-after.

There are lots of similarities between Gold and Bitcoin if you think about it.. They are both scarce. The number of Bitcoins is inherently limited to 21,000,000 units. Nearly 15,000,000 Bitcoins have already been created. We all know how scarce gold is. They are both increasingly hard to mine (even though the mining process are worlds apart). Both assets are almost impossible to counterfeit… I could go on. The point is that this technology will soon be widely adopted but Bitcoin has a lucky place in that it was the first on the block (pun intended).

My prediction is: the price will keep rising at the same rate before levelling out once the large financial institutions have got a handle on the tech and built it into their back ends. This looks like it isn’t too far off.. "the venture arm of Santander, estimates the blockchain could eliminate $15 billion to $20 billion in costs from their banking infrastructure by 2022.” 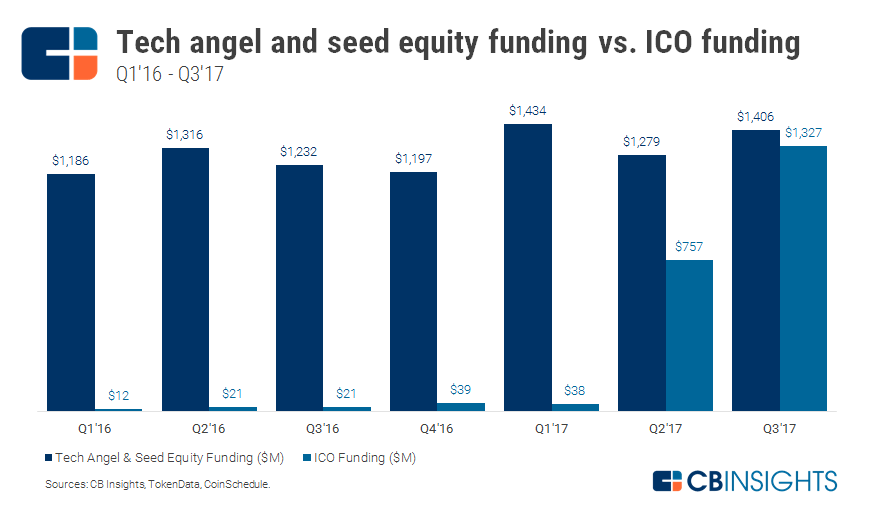 So the ICO bonanza has been getting tons of press, and for good reason. Now almost on a par with traditional funding routes, this must be really ruffling some feathers with some Silicon Vally VC’s and the money men.

This is undoubtedly a bubble waiting to burst and anyone who tells you otherwise will probably try and sell you some alt coin, moments after telling you it’s not a bubble. Vitalik Buterin, Ethereum founder - and all round Blockchain guru agrees with us saying that he thinks 9 out of 10 start-up tokens are doomed to failure “There are some good ideas, there are a lot of very bad ideas, and there are a lot of very very bad ideas”. We have to admit there are some hilariously bad ideas out their raising tones of money at the moment, I just hope that when the bubble bursts it doesn’t hurt the credibility of the blockchain too badly. 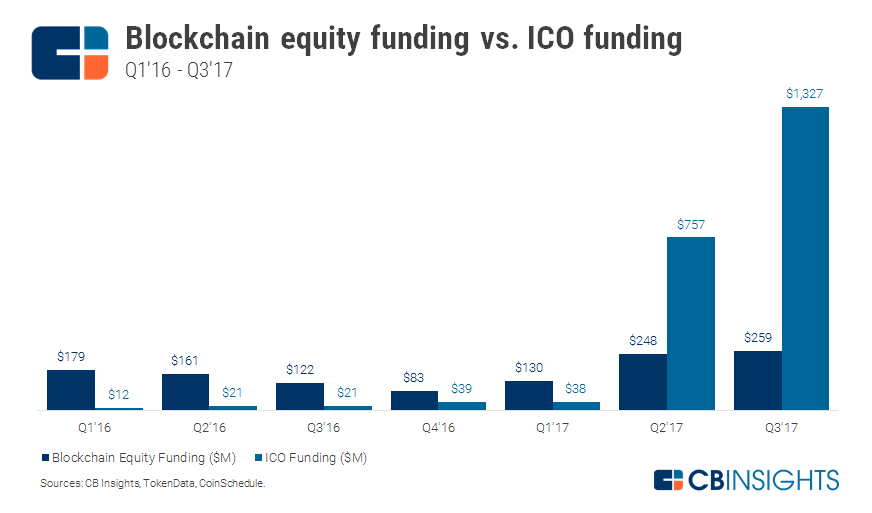 When raising funds for our project we went down a traditional funding route. According to the chart above this means we are very much in the minority. However, we are happy with the route we took. Traditional investors mean diligence processes (annoying at the time but very worthwhile) and people with credibility, experience and knowledge in scaling companies. This is invaluable for a start up or any company with an ambitious idea. 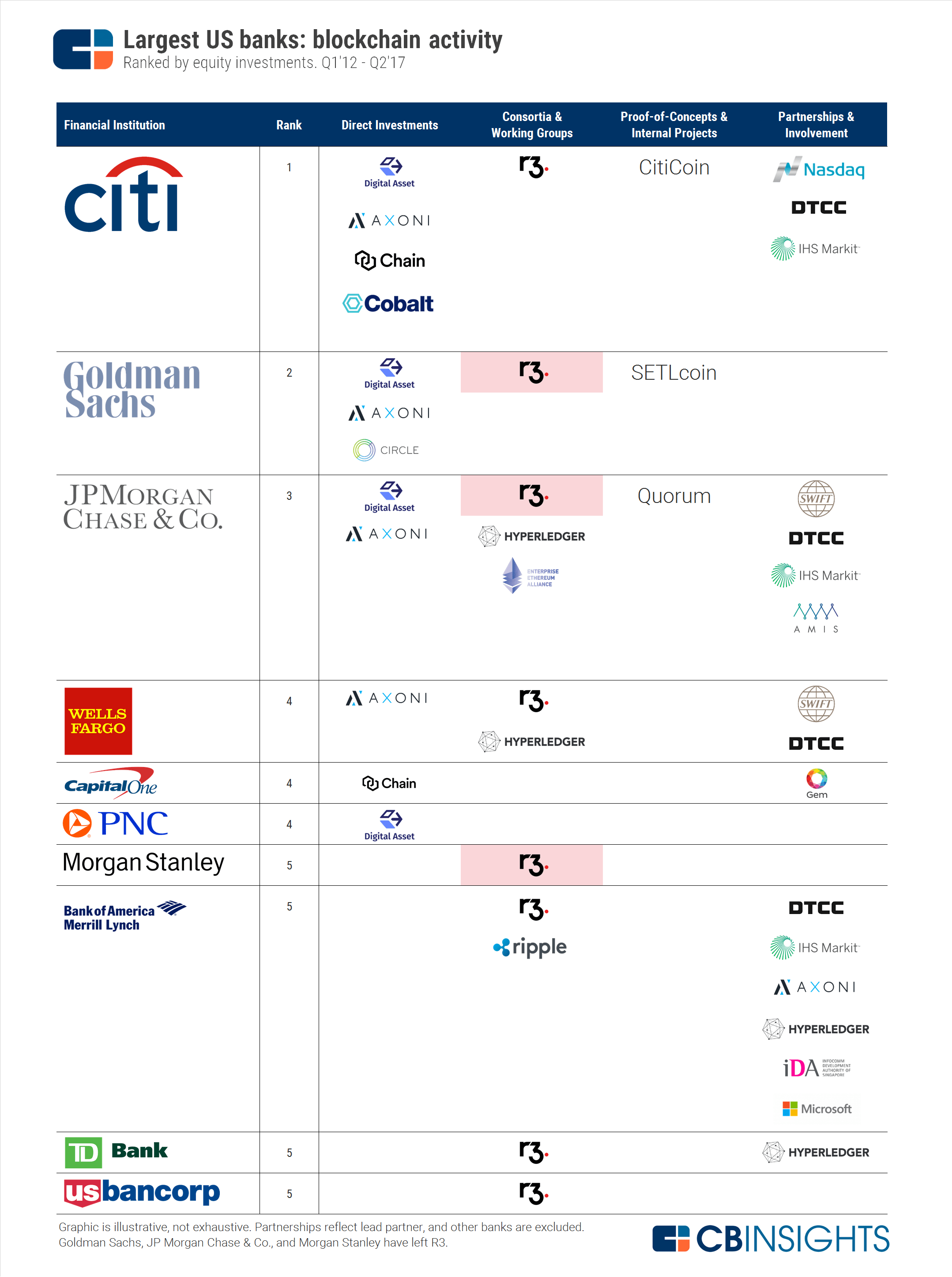 It’s pretty interesting that some of the people chucking the most money into solving the issues around current Blockchain tech are the traditional financial institutions or the ‘incumbents’. This doesn’t surprise me as they have the most resources at their disposal and are set to benefit hugely if they can integrate the Blockchain into their back end systems.
Having a transactional Blockchain system where you can que up and buy your Starbucks is still a little while off. But if the Banks can integrate some of the benefits of the Blockchain then they can slash their running costs and hopefully make things a bit more transparent (very doubtful).

Note if you are young and looking for a job, think carefully before you go into finance.. They won’t go down without a fight but their days are numbered. In fairness they did make (lots of) hay when the sun shone in the very recent days where every numpty in Canary Warf got an eye watering bonus. The manual processes within the financial institutions are no longer needed, Bitcoin and Etherium are the existing proof of this.

As a whole the Blockchain space is still very much Budding. Governments will have to contend with how to regulate inherently decentralised protocols and develop legal frameworks. ICO’s will have to find a way to survive with regulation creeping in. Bitcoin will have to disassociate itself with the Black market. Tons of technical aspects need to be figured out: like latency, Proof of Work vs. Proof of Stake, etc, and the list goes on..

What gives us a huge amount of encouragement is the fact that beneath it all people are still looking for real-life Blockchain usage beyond speculation. This is one thing we at Citizen Ticket are managing to bridge with our Blockchain ticketing solution BitTicket. Most teams exploring Blockchain use-cases have been hard pressed to find users, we are slowly increasing our user base and are showing people the foundational benefits.

Our philosophy is: that if a Blockchain platform or application can’t be used by your 8 year-old nephew or your drunk granny then it is probably too technical. We want to start with our customers and work backwards. More and more companies are learning that customer obsession is not just listening to your customers but it is inventing on their behalf.

“If I asked what people wanted, they would have said faster horses” – Henry Ford

This is not investment advice Ref: CB Insights, Coinbase

Blockchain. Decentralized. ICO. “Buzz” words, employed by most blockchain startups. But if we look beyond the hype, are blockchains really fit for business? The answer, at least for the event

We are hugely excited to be working with Hidden Door on their 2018 festival! Hidden Door is a multi-arts festival, exploring music, visual art, theatre, film, spoken-word and late night DJs. The festival runs for just over a week, opening up exciting and innovative